JavaFibs / Re: JavaFIBS - LINUX - how to create a Menu Shortcut

is a hidden folder.

be sure you have Java installed in your system or the program won't work and you'll receive an error message.

to check, open terminal and type:

the installed version should appear.
If it shows anything other than "version (number, blablabla)", you don't have java installed.

after that, everything should run just fine.

Using backgammon software / Re: Gnubg-Incomprehensible move (for me)

Hello,
I'm learning this game, while playing I stumble across a move that I do not understand
I'm kooliah(black)
Red rolls the dice 4:2

A great site for learning the game is Backgammon Galore.
www.bkgm.com
The attached screenshot will show what they have for the rules of bearing off.
Hope this is of some help.

Using backgammon software / Re: Gnubg-Incomprehensible move (for me)

Hello,
I'm learning this game, while playing I stumble across a move that I do not understand
I'm kooliah(black)
Red rolls the dice 4:2

« Last post by inim on December 19, 2017, 02:56:30 AM »
From time to time there is a request to recover a forgotten FIBS password from a JavaFIBS 2001 preferences file. Due to some obfuscation (not really encryption) you can not easily recover it. So I decided to document the algorithm in the form of a small Python code snippet. In the hope that this is useful - no warranty, no copyright. Written 2017 by Ingo Macherius and hereby released to the public domain. You find the preferences file needed in the JavaFibs2001 installation directory subfolder "user/yourfibsnick/preferences".

Backgammon Studio keeps improving and I have updated the version number to 4.3 with these fine improvements: 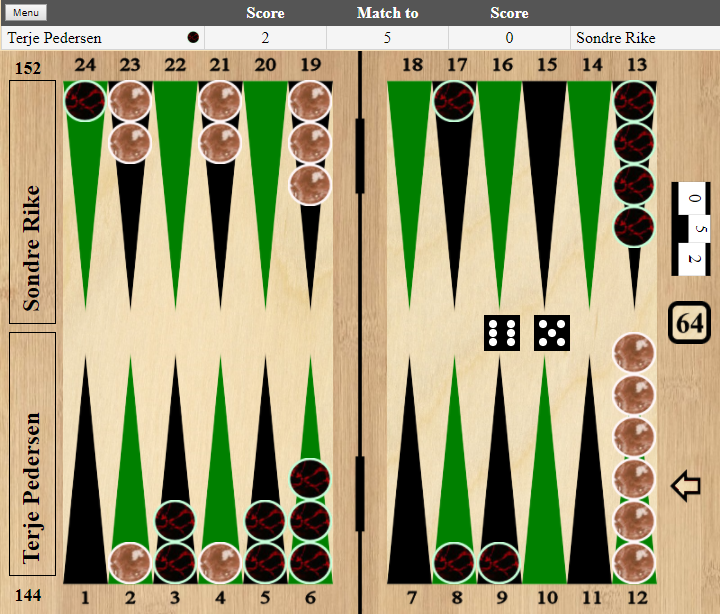 Go for the kill putting two checkers on the bar or just play it quiet? 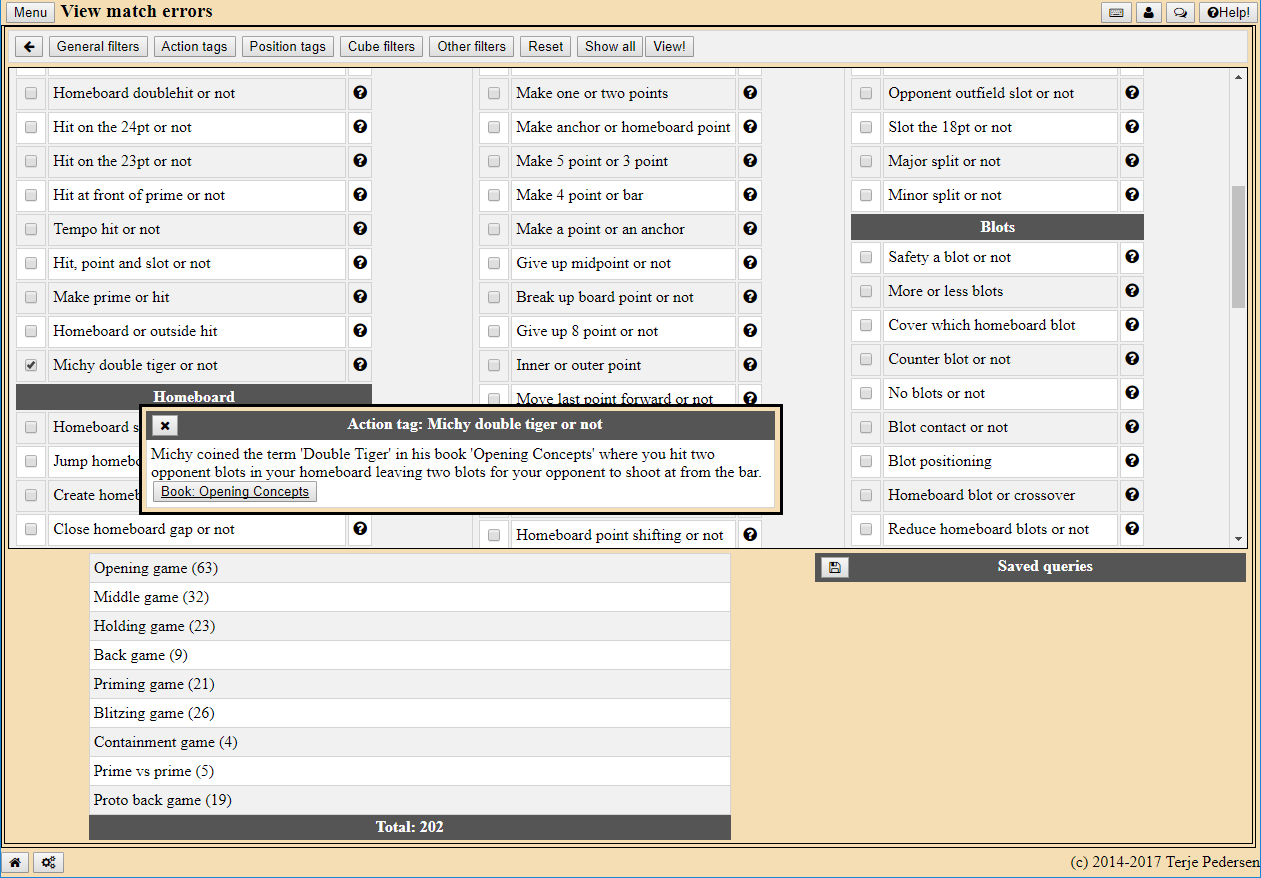 Search for Michy's Double Tiger positions in the search section. 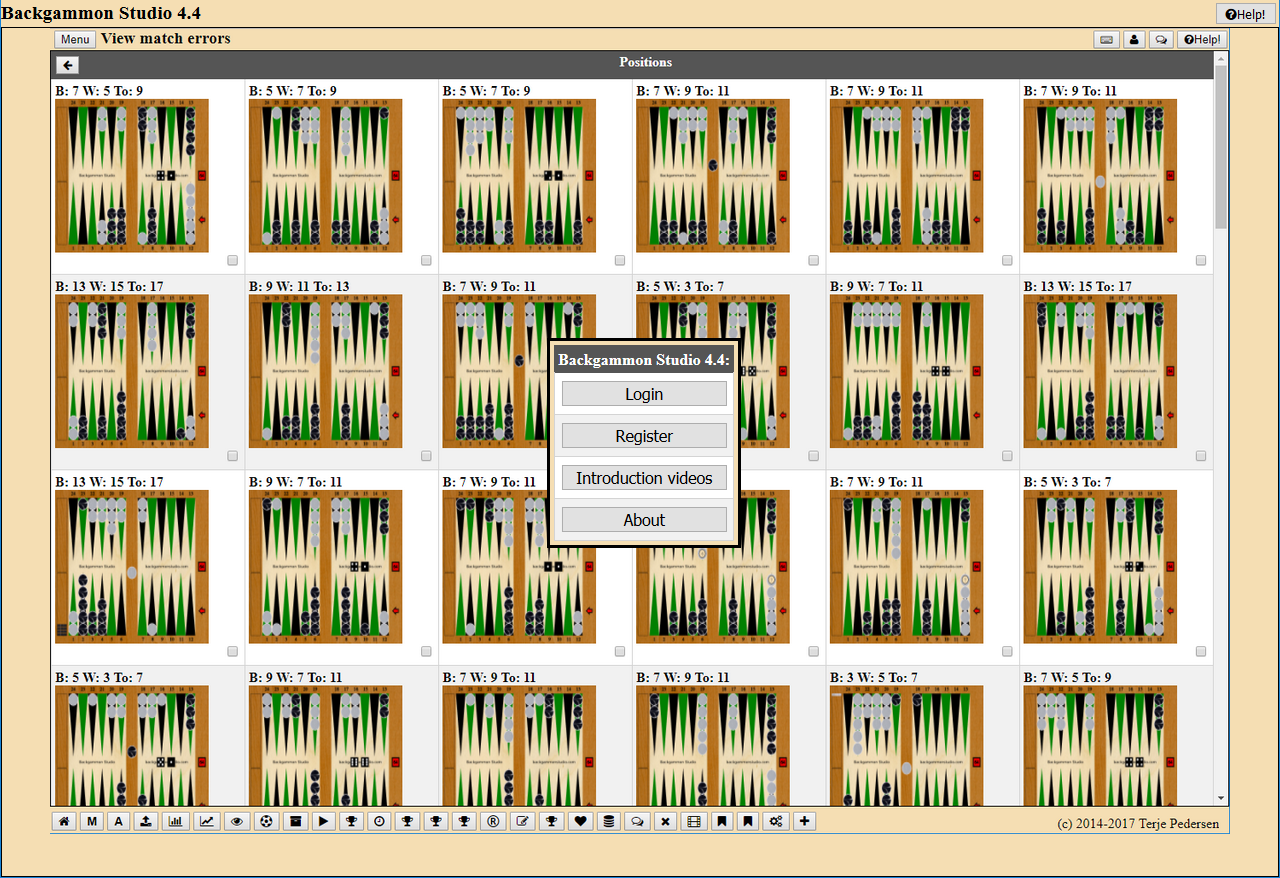 New login page now with no ads! A fading slideshow of interesting sections found inside is shown. 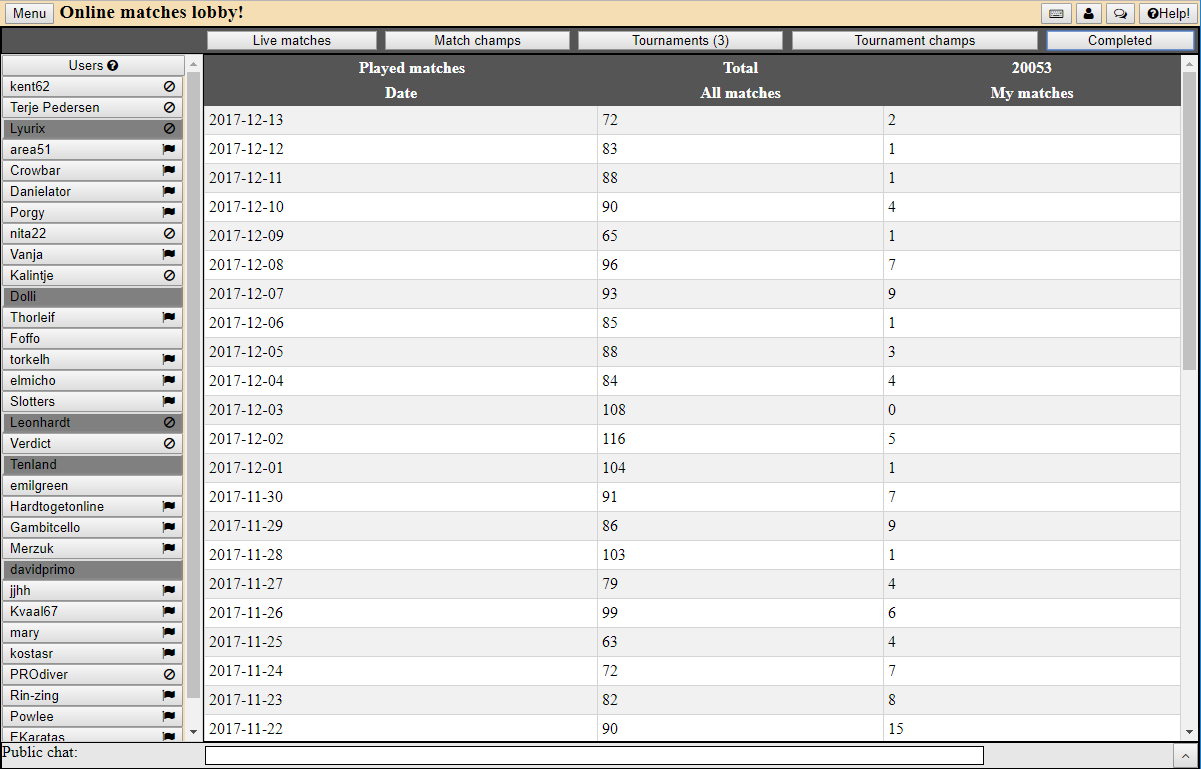 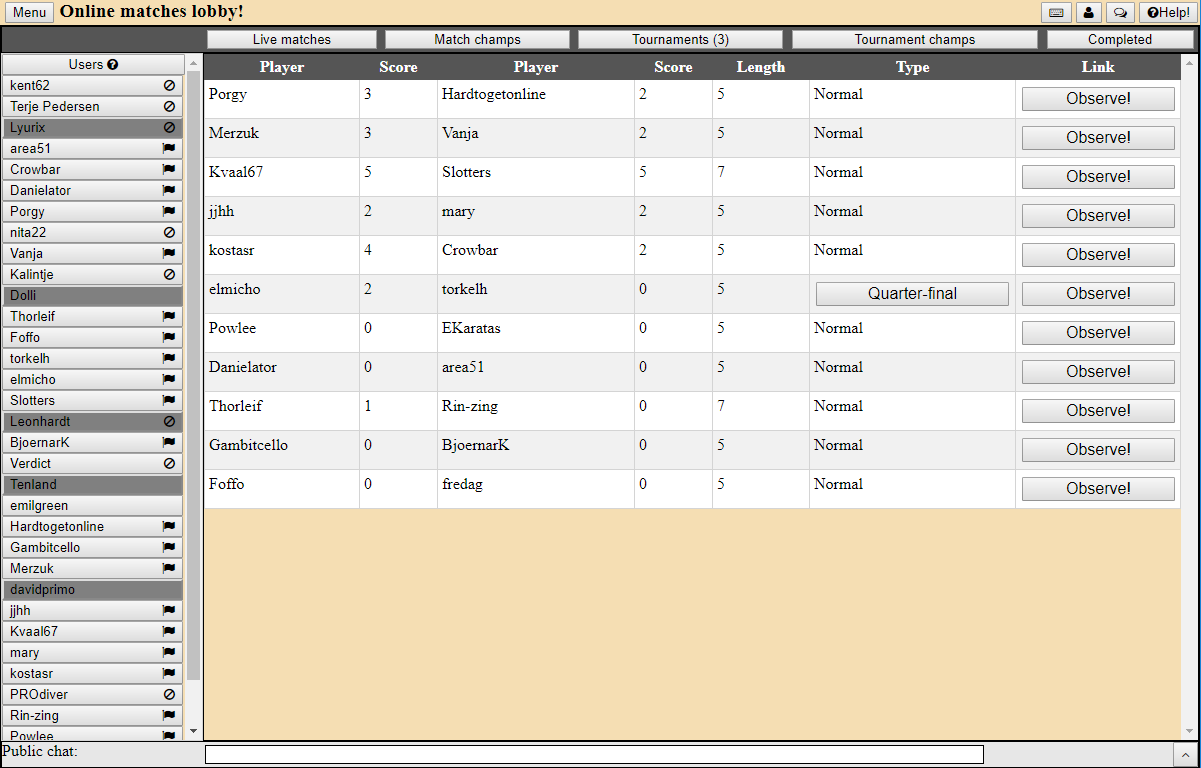 The match lobby has been cleaned up with a row of buttons to display different subsections and the chat can be raised/lowered with the small arrow key at the bottom right hand side. On mobile you can swipe left/right between sections. Nice turnout in the evenings european time! 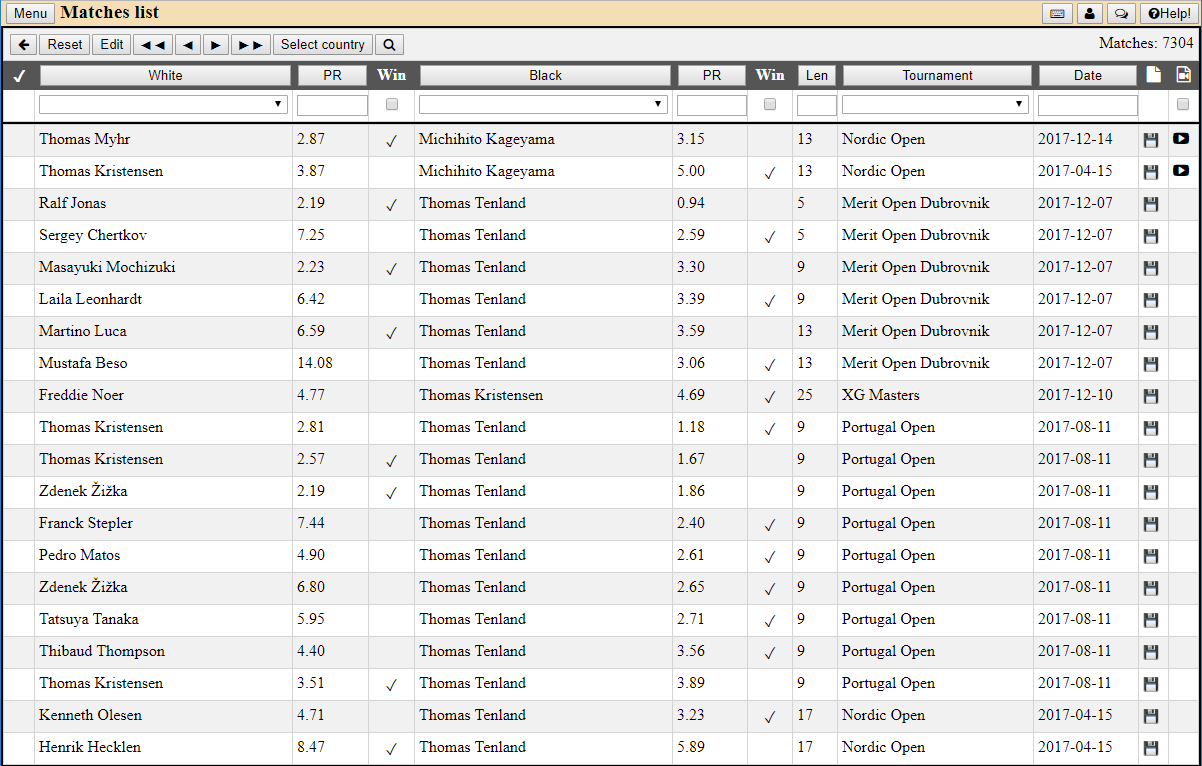 I have located and received a fair amount of matches recently which is awesome! Thanks a lot to everyone who have contributed! I also got a tip from Florin Popa about lots of matches from Italy which I have added. That also uncovered an impressive PR performance by Fernando Braconi: 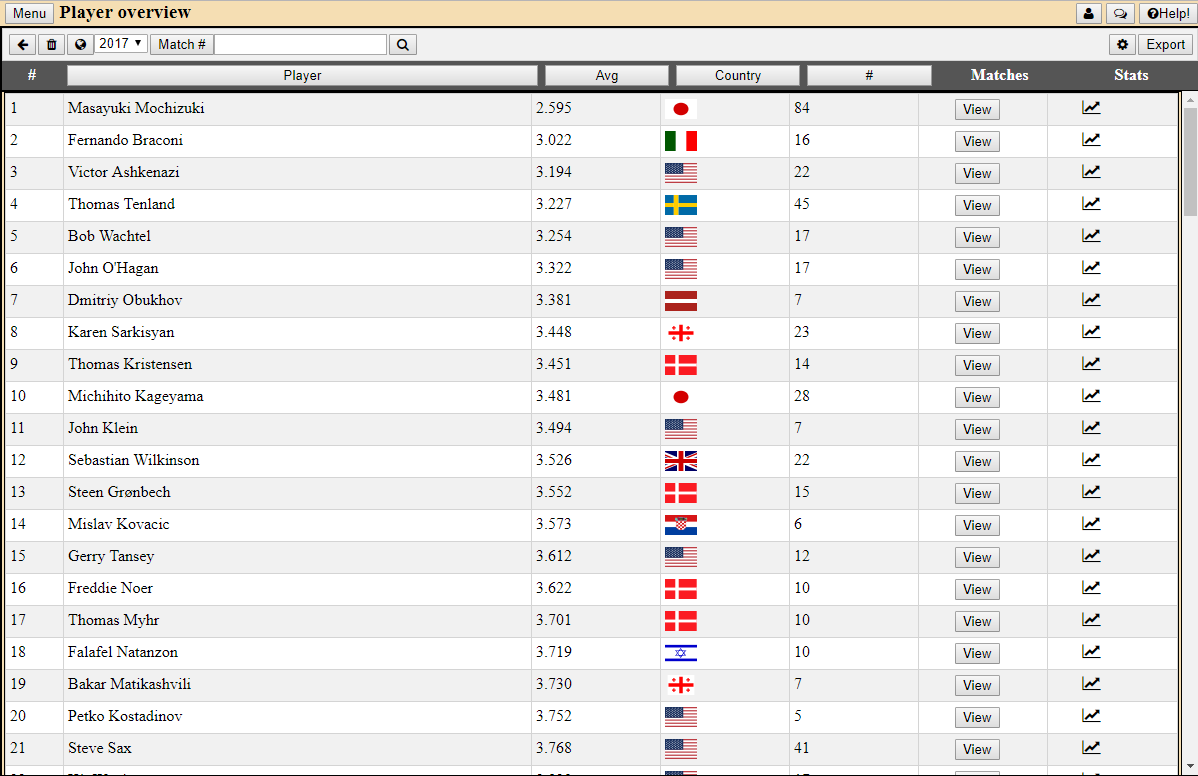 Claiming the second spot for 2017 only passed by the unbeatable Mochy! Now that is a performance worthy of a Backgammon Giant! :-)

Also an incredibly strong performance by Thomas Tenland! He was in the top 10 last year too! Two other players who weren't in the top of the 2016 list: Karen Sarkisyan and Sebastian Wilkinson! Amazing! Congratulations!

Should you share your tournament matches with Backgammon Studio? Don't take my word for it!

Florin Popa: "My hard disk got broken so I lost many of my live matches but because I sent them to you I can find them again".

Haven't tried Backgammon Studio yet? You should! :-)

Other Fibsclients / Re: getting past moves for a new game you're watching?

« Last post by csells on December 13, 2017, 12:48:54 AM »
thanks, diane. I'm relatively new to the fibs community. I'm building a web front end and was interested in letting people jump into any game and see the whole history, not just the moves that they're around for (although, as you say, it's a low priority feature). I did some digging and wasn't able to find any bot source code as a way to get started. Any pointers would be appreciated.
48

Other Fibsclients / Re: getting past moves for a new game you're watching?

« Last post by diane on December 13, 2017, 12:23:11 AM »
the answer is no, you cant rewind a match you just started watching. The moves are stored on your interface, so you only have what you were there to see.

The bot you describe is certainly possible, but a lot of work, for potentially little use.

You are more than welcome to code it, and then talk to Patti about running it. The rules seem to be that it can be there, as long as it identifies itself as a bot, and serves a useful purpose or need in the community.
49

Other Fibsclients / getting past moves for a new game you're watching?

« Last post by csells on December 05, 2017, 06:38:11 PM »
If I "watch" a user playing a game, is there a way to see the moves that have already happened in the game and/or in the previous games in the match? I know you can do this using "oldmoves" for saved games you are playing yourself; I'm looking to be able to "rewind" a game/match I'm watching.

If such a thing doesn't exist, would it be possible to build a bot that watches all of the games and keeps track of this kind of data?
50

Improving your backgammon skills / Norway in the lead!

Norway just took the lead in the number of World Class level players on Backgammon Studio! 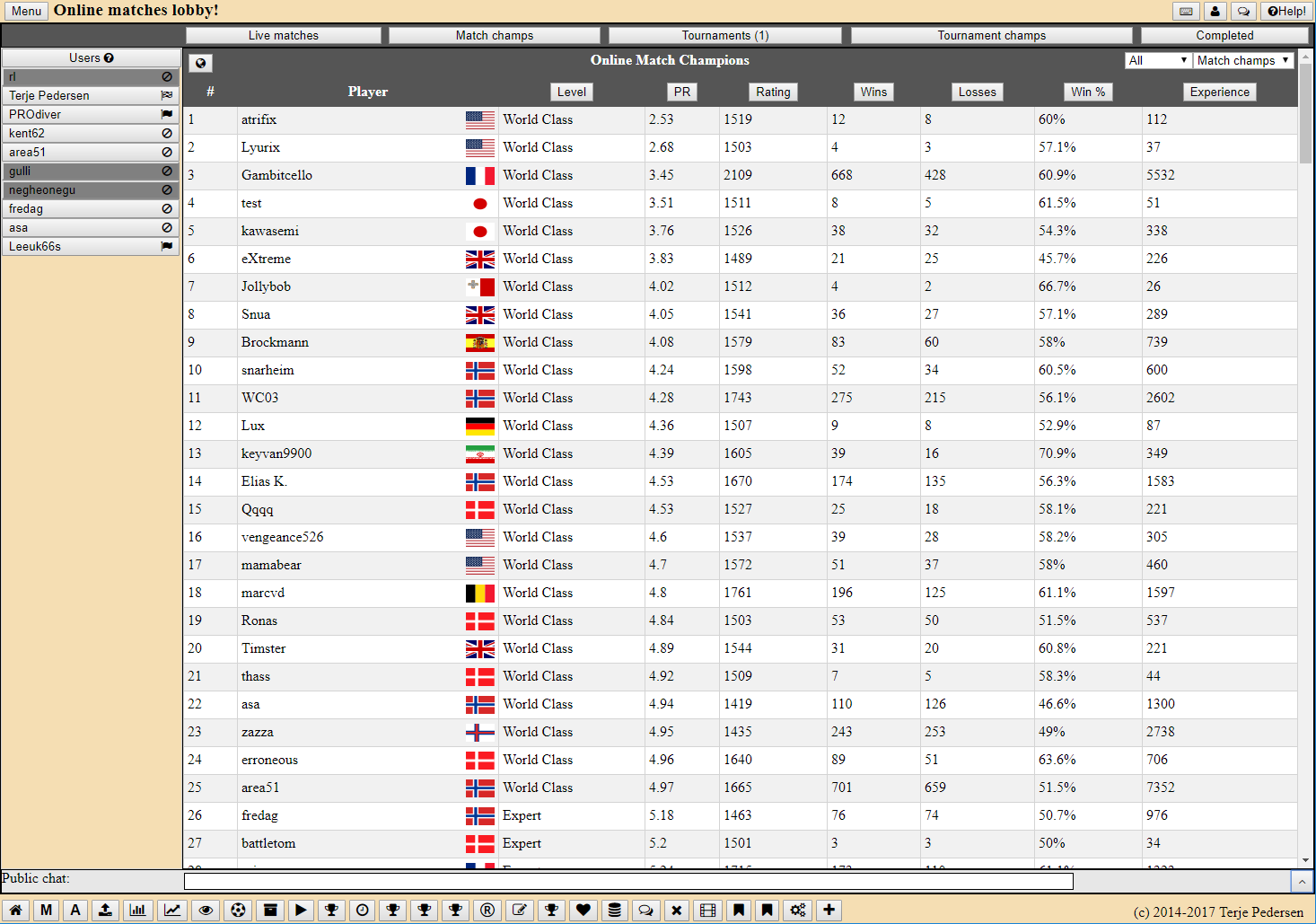 With 5 having achieved this level! Denmark tied with US in second place with 4 followed by UK with 3 and Japan with 2! Awesome! hehe

This guy Brockmann might speak danish but without creating your own profile the login country will be used as flag...

This is also a view of the new lobby. Have I mentioned it here? I had to clean up the old one as it was turning into a bit of a Frankenstein monster...

I have created a video to demonstrate the new lobby:

but it is fairly straight forward. I also created a new video on the online match chat as it turns out the old one was more confusing than I thought.